You may ask who is Arda?

Arda Türkmen  is a young entrepreneur, was born in 1975. Educated at Saint Benoit French High School, he went on to graduate in Business and Performing Arts at Istanbul’s Bilgi University. Beginning his career organizing student tours, simultaneously he began his transition into the food and drink industry as a business industry.  Towards the end of 2003, he founded the Rocket Catering firm, and has to date undertaken many successful food-drink organisations.  He is also a favourite with many international stars visiting Turkey for his culinary endeavours. In addition, he writes and presents ‘Arda’s Kitchen’ every weekend on CNN TURK.

The Haze in Karaköy is opening its doors to Arda Türkmen’s new taste concept ‘Forneria’.  Since 2008, with the landmark restaurant Leblon at Asmalımescit, the successful business manager and presenter of CNN Turk’s ‘Arda’s Kitchen’ food programme since 2010, Arda Türkmen, is breathing new life into the world of food and drink.  His new brand Forneria will bring innovative flavour to Karaköy with all new stone oven dishes, and original presentation.  Forneria with its ‘from the stone oven to the table’ concept offers a variety of pizzas, individual cast iron dishes, traditional ingredients, original flavours and varying daily lunch specials, and is the brightest star in Istanbul’s food and drink sector and the fast-developing Karaköy district…

Forneria, adding Turkish-inspired touches to its menu of classic Mediterranean tastes, is opening a new and exciting page in Karaköy’s fast-developing world of gastronomy.
Every morning at 07:00 guests may start the day with a lavish ”Good Morning” breakfast at Forneria.
For those living, working and, of course, visiting Karaköy, the morning service begins with traditional, daily fresh and totally organic flavours such as special homemade preserves, fresh daily clotted cream, Bodrum olives, and Afyon spicy sausage, and every lunchtime a choice of dishes are on offer for customers’ culinary delight.
Aside from the set ‘A la Carte’ menu, there are daily lunchtime specials, reflecting Forneria cuisine’s diversity, including new versions of traditional Turkish flavours recreated by Arda and his team.
Forneria is the best alternative for the use of delicious and original ingredients in such well-known Turkish dishes as Kabak cızlama (Fried Courgette), Göbek imambayıldı (Roasted Aubergine with Minced Beef), Ayva kısır (Quince Bulgur Wheat Salad), and Patlıcan silkme (Braised Aubergine).
With the dictionary meaning of ”dishes from the oven”, Forneria’s originality lies in its stone oven baked pizzas and delicious dishes slow-cooked in individual small pots.
From seafood to whole wheat, there is an endless choice of pizza varieties at Forneria, and its signature dish of beer stew slow-cooked in miniature pots is not to be missed.
As the evening approaches, at Forneria a new adventure begins.
Coming to Turkey as Arda’s guest in 2012, world famous barman, Max La Rocca’s Swizzle and Tricolore cocktails, created especially for Arda, should also be on your list of things to try at Forneria.
Beginning March 2013, Karaköy’s new address Forneria invites you on a brand new culinary adventure at The Haze Karaköy.
(http://www.thehazeistanbul.com/en/eat_drink)
http://tv.cnnturk.com/ardaninmutfagi
In one of his television programs, “Arda’s Kitchen”,  today, I watched the story of “simit” (traditional ring-shaped bread covered with sesame seeds) and one of the historical bakery at Galata, karaköy. And I thought that it would be interesting for you too. These are some of photographs from the television screen but you can watch the original video on the CNN Turk video link on the above. The bakery is “Galata Simitçisi” 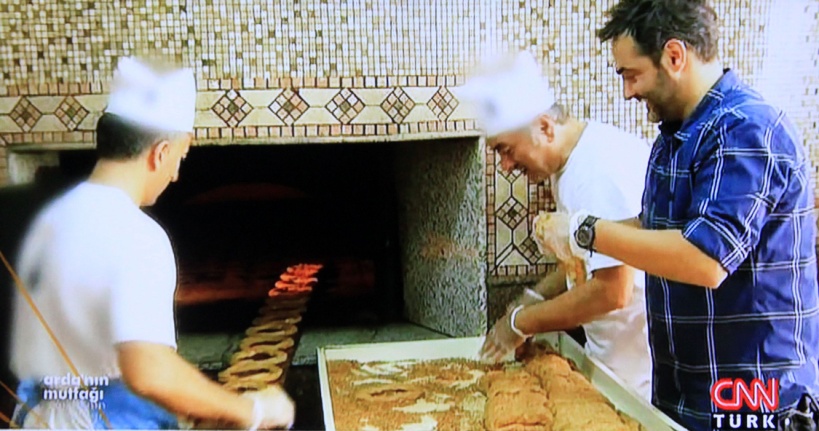 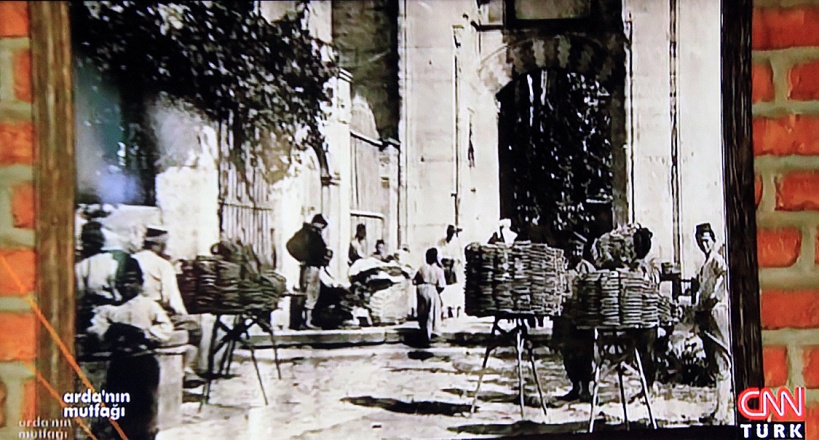 This is from family photography album, and the young man on the right looking at us was the grandfather of the owner of this bakery. The job goes on from father to son in years…