OYA, THE LANGUAGE OF ANATOLIAN WOMEN 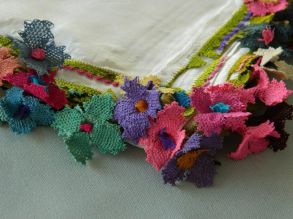 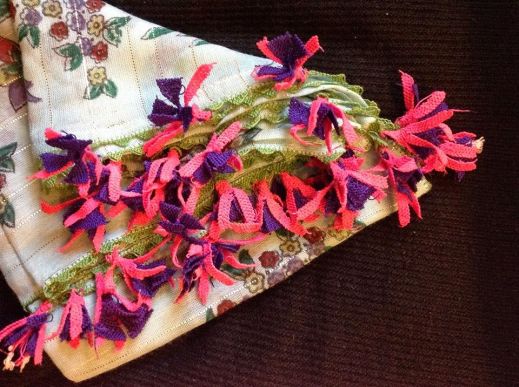 Anatolia’s thousand and one species of plants and gaily colored flowers are reborn in the imagination and inner eye of its women. The history of the decorative edging known in Europe as ‘Turkish lace’ is thought to date back as far as the 8th century B.C. to the Phrygians of Anatolia. Some sources indicate that needlework spread from 12th century Anatolia to Greece and from there via Italy to Europe. Traditionally, the headdresses and scarves women wore on their heads, the printed cloths, and prayer and funeral head coverings were decorated with various kinds of oya, which was also used on undergarments, to adorn outer garments, around the edges of towels and napkins and as a decorative element in many other places. In the Aegean region even men’s headdresses were decked with layers of oya. 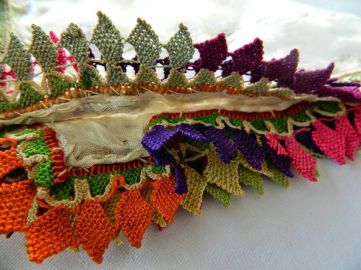 Oya edging, which appears all over Anatolia in various forms and motifs, has different names depending on the means employed: needle, crochet hook, shuttle, hairpin, bead, tassel to name just a few. Sewing needle oya is a variety that was produced by affluent, aristocratic, urban women. The most beautiful examples of such oya, which was usually made with a sewing needle using silk thread, were produced in the Ottoman Palace. 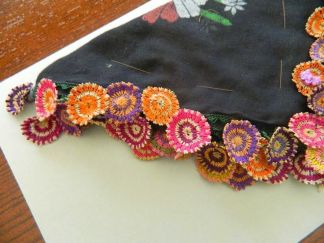 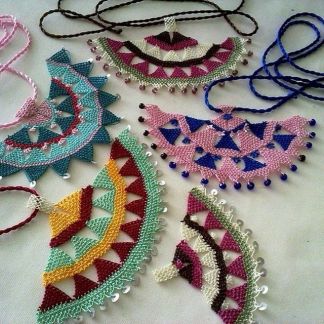 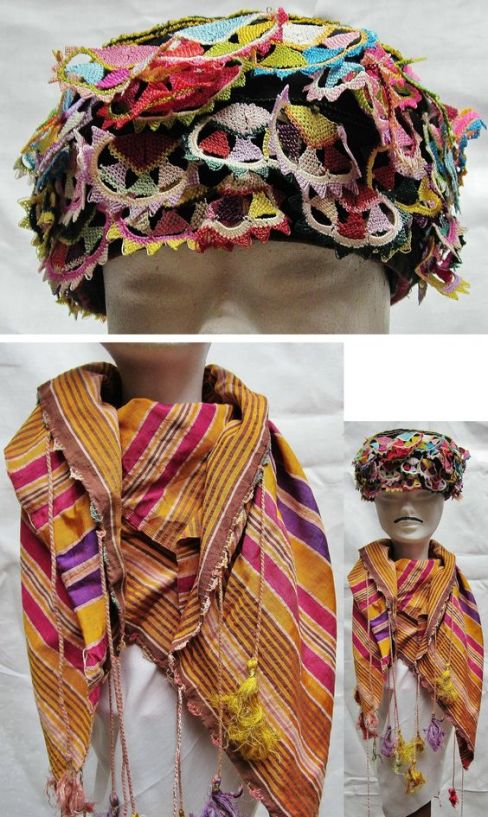 Crochet work can be done in different ways in colors of one’s choosing by using a single crochet hook. It differs from sewing needle oya in that it employs thicker thread and is less delicate in appearance. Shuttle oya is produced more by women in the villages and provincial towns, using a small shuttle made of bone. Either one or two colors are used. ‘Firkete’ or hairpin oya is made by threading beads, sequins, coral or pearls onto thread of a single color. ‘Çaput’ meanwhile, which is more common in the villages where very beautiful and creative examples are produced with limited means, is done by cutting and folding colorful pieces of coarse cloth into squares and using a crochet hook. Crochet hooks are also used for adding tassels. Beaded edging, which is frequently encountered in Anatolia, is done by threading beads of various colors onto the ends of oya made either with a sewing needle or a crochet hook. Finally, silk thread and cocoon fragments are the materials of ‘koza’ or cocoon lace oya, whose primary motifs are created by the cocoons and later added on to oya produced with either a sewing needle or a crochet hook.

Young maidens, new brides, and young women traditionally conveyed their loves—whether hopeful or hopeless, their expectations, their good tidings, their happiness and unhappiness, their resentment and their incompatibility with their husbands to those around them through the oya they wore. In the Marmara and Aegean regions, for example, floral oya is a phenomenon in and of itself. A woman adorned her head with oya embodying flowers, nature’s loveliest gift to man, the species of the flowers differing depending on her age. Aged grannies used tiny wild flowers, which symbolize the return of dust to dust. Virgins, brides and young women employed roses, arbor roses, carnations, jasmine, hyacinths, violets, daffodils, chrysanthemums and fuchsia in their oya. And all of them carry messages which are conveyed through their shapes and colors. Women reaching forty used a bent tulip. As in the poem ‘Narcissus’ written by the Roman poet Ovid in the 8th century, a woman who wrapped yellow daffodil oya around her head was declaring a hopeless love. A woman whose man had gone abroad to work bound wild rose oya around her head; new brides on the other hand wore oya of roses and arbor roses. Girls engaged to marry the man they love wore oya of pink hyacinths and almond blossoms, while a girl in love wore purple hyacinths. Plum blossom oya was worn by brides. A new bride who has a disagreeable relationship with her husband chose ‘pepper spice’ oya for her head, as if to say ‘my marriage was unhappy from the start’. But if she bound red pepper oya around her head, this was a sign that her relationship with her husband was as spicy as red hot pepper. 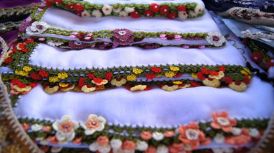 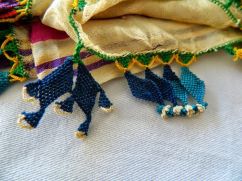 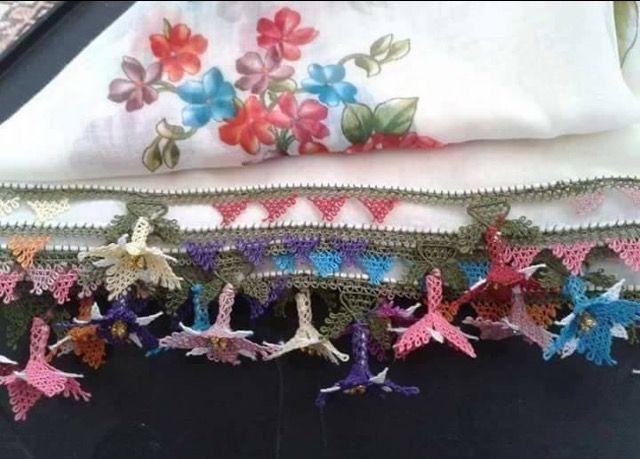 In Konya a girl engaged to be married sends a piece of oya -edged printed cloth to her prospective mother-in-law. If what she sends is ‘meadow and grass’ oya, this implies that their relations are cordial. But if she sends ‘gravestone’ oya, it means ‘the coldness between us will endure until death’. By sending ‘hairy wolf’ oya meanwhile a young girl indicates that she is displeased with their relationship. Since the oya is seen by the neighbors at the wedding ceremony, it is of course the wish of all mothers-in-law that their new daughters-in-law wrap ‘meadow-grass’ oya around their heads. The groom’s family, too, sends the bride a ‘bridal cloth’ with two or three oya flowers from which the bridal headdress will be made. Oya edging consisting of flowers on a branch is worn by brides in some regions of Anatolia. Such lace, of which there are many varieties, represents a sort of ‘tree of life’ for a bride who wants to produce many offspring. Not only women’s emotions but also incidents that have left a mark on society can be observed in oya: ‘Pasha star’, or ‘Zeki Müren eyelash’ named for a famous Turkish singer of the 20th century, ‘Türkan Soray eyelash’ associated with Turkey’s veteran star of the silver screen, and ‘Ecevit eyelash’ named after former prime minister Bülent Ecevit, to name just a few. Others include ‘kaymakam rose’, ‘Atatürk flower’, ‘rose of Japan’, ‘sot’s leg’, ‘shepherd’s flea’, ‘bachelor’s flea’… The list is endless. A product of the deep-rooted Anatolian culture with no exact equivalent in other languages, oya edging not only adorns women’s headscarves today, it is also used as an accessory in modern design. Meanwhile it continues to be an indispensable addition to a girl’s trousseau chest. 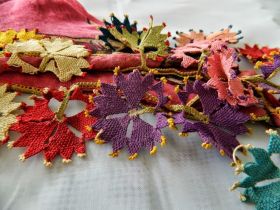 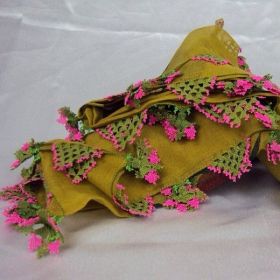 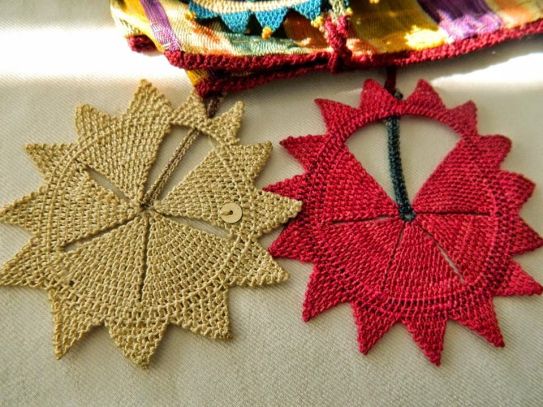 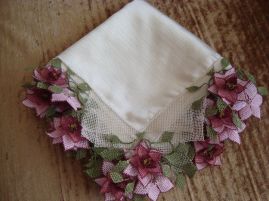 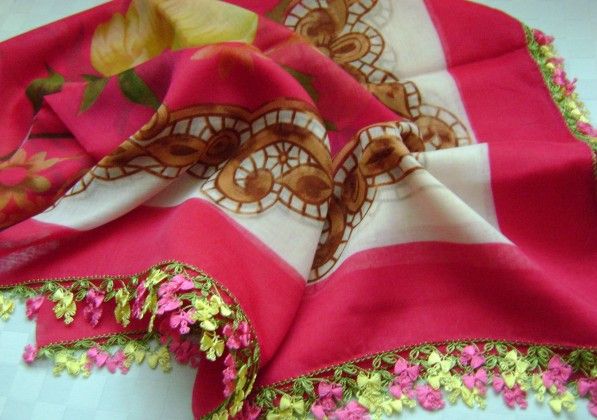 If you want to learn and try, you can write on Google, “iğne oyası” for video, you will find many of them.